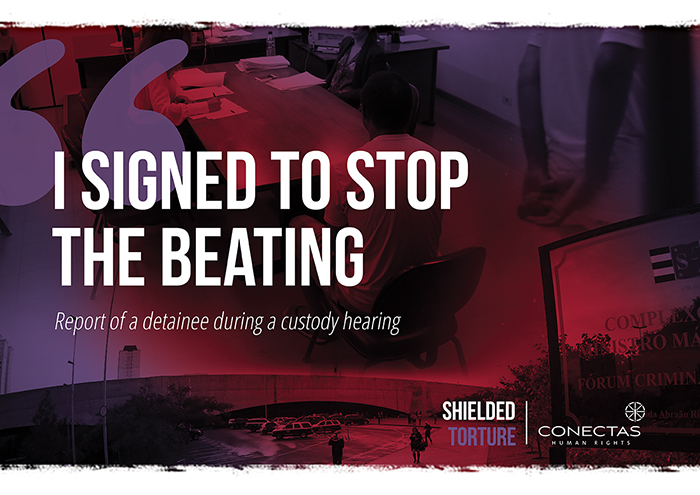 After analyzing 393 cases of detainees who received custody hearings in the Criminal Courthouse of Barra Funda, in São Paulo, Conectas filed representations on Monday, February 20, with the Internal Affairs Office of the São Paulo State Court, with the State Attorney General’s Office and with the Higher Council of the State Public Defender’s Office.

In the documents, Conectas presents the findings of the research “Shielded Torture” that exposes the omission and negligence of the bodies of the justice system when they hear reports of torture and mistreatment. The organization is calling for the conduct of judges and prosecutors to be reviewed and for the institutions to make concrete and immediate improvements to their protocols on how to act in custody hearings.

According to the study, which substantiates the representations, judges did not ask the detainees about the occurrence of violence at the time of their arrest in 33% of the hearings. Among prosecutors, the disregard was even greater: 80% of the time detainees reported having been the victim of torture or mistreatment, the prosecutor did not ask a single question about the events.

Click here to see more data presented by the research “Shielded Torture” on the conduct of the bodies of the justice system.

“The research demonstrates that the custody hearings, when it comes to combating torture and police violence, are operating with a procedure that reinforces the submission and dehumanization to which the torture victims are subjected,” reads an excerpt from the representation sent to the Internal Affairs Office of the State Court.

Besides the inaction and the intimidating manner of the judges in their interaction with the victims of violence, the study also criticizes how the cases are referred. Currently, when they decide to investigate what happened, all the judges do is forward the case to DIPO 5 (Criminal Investigation and Auxiliary Services Division), which is responsible for receiving and processing complaints of police violence.

In a perfunctory manner, the complaints that are referred to this body are passed on to the internal affairs offices of the civil and military police – which means that the very officers suspected of torture ultimately receive information and pictures of the victims who dared to denounce them.

“Sending the case to the judges at DIPO 5, given the time delays and the compromised security of the alleged victim, rules out any possibility of a timely investigation and perpetuates impunity for torture,” reads the representation.

Conectas also harshly criticized the role of the prosecutors in the hearings. In the representation filed with the São Paulo State Attorney General, Gianpaolo Poggio Smanio, the organization points out that the Public Prosecutor’s Office has a constitutional obligation to oversee police activity and that this duty cannot be discarded when prosecutors assume the role of party in a criminal case.

The document lists several cases in which the representatives of the Public Prosecutor’s Office either ignore, discredit or even justify the episodes of police violence reported by the detainees. As far as Conectas is concerned, the pattern of conduct by prosecutors is one of omission.

“Omission in questioning the accused, omission in requesting investigations, omission in requesting the opening of police inquiries. They repeatedly respond to the reports of violence with either silence, innocuous referrals or an uninformed and irresponsible defense of the legitimacy and legality of the police action,” reads an excerpt of the representation sent to the State Attorney General’s Office.

According to the lawyer Sylvia Dias, a delegate of the Association for the Prevention of Torture in Brazil who reviewed “Shielded Torture”, “custody hearings are today, without a shadow of a doubt, one of the most powerful means of significantly reducing police violence and changing the dominant and widely-accepted culture of violence and brutality that pervades the actions of the security forces”.

But she adds one important caveat: “for this potential to materialize, certain criteria and standards for conducting the custody hearings need to be put into practice in order to create the right conditions for the detainees to feel safe to report cases of mistreatment or torture without fear of reprisals or some form of intimidation as a result of their complaint”.

The Higher Council of the Public Defender’s Office was also sent a representation. While recognizing that the public defenders who serve on custody hearings are, on the whole, committed to combating institutional violence, Conectas called for them to stand up more firmly to the judges and prosecutors.

The organization also pointed out the differences in the conduct of public defenders who work exclusively in DIPO (Technical Department of Police Inquiries and Criminal Investigators) and the conduct of those who are assigned to custody hearings from other departments. According to the study, the former intervened more frequently in cases in which there were reports of torture and mistreatment.

Click here to read the representation sent to the Internal Affairs Office of the State Court.

Click here to read the representation sent to the State Attorney General’s Office.

Click here to read the representation sent to the Higher Council of the Public Defender’s Office.

“Police violence when arrests are made is nothing new in Brazil, but the research provides solid evidence that the violence is ignored – and sometimes defended – by the members of the justice system, which is extremely serious and in violation of national and international laws and standards,” said Rafael Custódio, coordinator of the Justice program at Conectas.

“This is why we did not hesitate to denounce to the proper authorities the conduct of judges, prosecutors, public defenders and medical examiners in cases of torture. We hope that these institutions will act quickly and impartially, by investigating any disciplinary offenses and also making immediate changes to their codes of conduct,” he added.

The opinion is shared by the lawyer, sociologist and criminal justice researcher Fernanda Emy Matsuda, who also reviewed the study. “Police violence is supported by the lack of concern by the authorities to investigate these complaints,” she said.

“This system that confers legality on the arrest (even when illegal) has several effects: it discredits the victim of violence, endorses violent police activity and excuses the rights violations that occur at the time of arrest. As such, it is more than just a tolerance, which implies a certain passivity by the professionals of the justice system; there actually appears to be collusion, a deliberate intention to validate police activity through bureaucratic mechanisms that normalize violence,” she said.