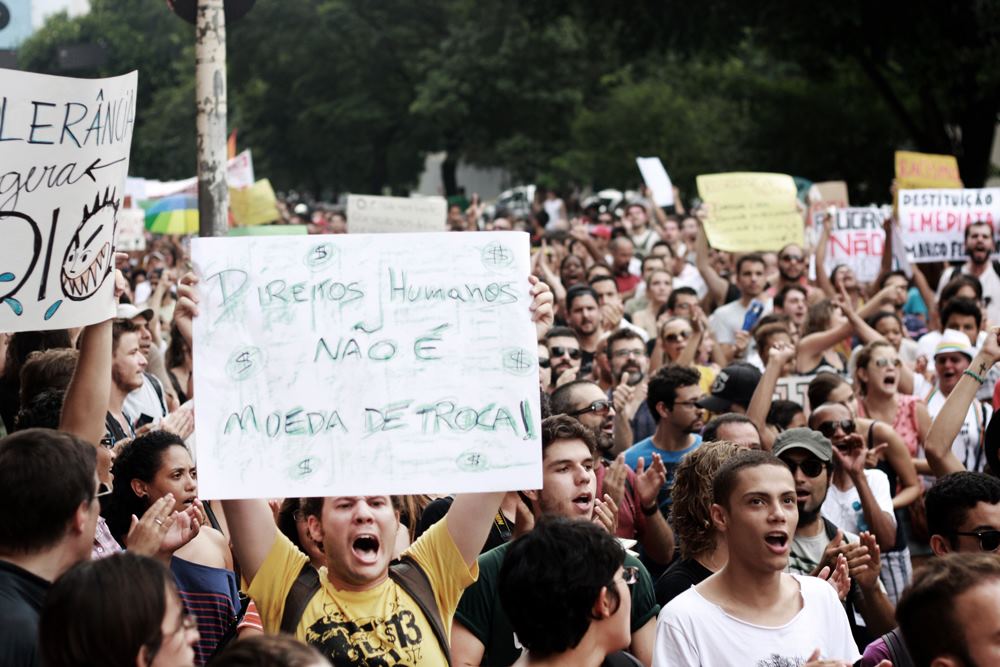 Members of Congress and political parties last week began the process of choosing the new president of the Commission on Human Rights and Minorities (CDHM) of the lower house. Repeating last year’s process, which resulted in the appointment of the evangelical pastor Marco Feliciano to the position, members of Congress who are openly opposed to human rights have also joined the dispute.

Conectas reaffirms the importance for the decision to be democratic and transparent and for political interests not to stand in the way of the urgent need to reopen the CDHM for public debate on human rights.

“The Commission on Human Rights cannot be a second choice for the parties. Members of Congress have the responsibility to not allow the division of positions, once again, from blocking progress on urgent matters for minority groups,” said Juana Kweitel, program director at Conectas.

Since Feliciano took office, in March 2013, the demands of social movements and civil society have been deliberately excluded from the CDHM’s agenda, such as the bill that granted legal equality for Social Security purposes to homosexual couples, allowing people of the same sex to be registered as dependents.

While progressive demands have been barred, some notably discriminatory proposals have received the consent of the president. One example was the “gay cure” bill, sponsored by Congressman João Campos, which would have lifted the ban imposed by the Brazilian Psychiatry Association on the treatment of homosexuality as a disorder. The proposal was rejected by members of Congress shortly after leaving the commission.

“The new president should resume the commitment to the fundamental principles of human rights, starting with respect for minorities. It took Brazil a long time to build a framework for the protection of these groups and we cannot allow discourses like Feliciano’s to prosper again in the legislature, threatening recent breakthroughs,” added Kweitel.

Following the approval in April of a rule preventing civil society participation in the CDHM sessions, Conectas, Pedra no Sapato (Thorn in the Side), Existe Amor em SP (There’s Love in São Paulo) and the cartoonist Laerte created the Extraordinary! Commission on Human Rights – a parallel commission, in a public square, to discuss the topics ignored by the lower house.

At these events, organized in a decentralized manner, Brazilian and international activists discussed the war on drugs, the LGBT cause, the feminist movement, violence against indigenous peoples, racism, rights violations during large-scale construction projects and mega-events, the prison system and police violence.

See here and here the results of the events in which Conectas participated.

The organization also gave it support to the statement of condemnation issued by the Dhesca Platform, which demanded a clear position from the Special Secretariat for Human Rights and the Presidency of the Republic on the appointment of Feliciano. “It is fundamentally important for the presidency of the commission to honor its history of struggle for rights in this country, of recognition for diversity and tolerance,” read the statement.

What the law says

Created in 1995, the CDHM is one of the 21 thematic commissions in the lower house of Congress. Among its duties are to “contribute to the realization of human rights” while “starting from the principle that every human person has basic inalienable rights that must be protected by the State and by the whole international community.”

In practice, the work of the commission consists of receiving, evaluating and investigating claims of human rights violations, discussing and voting on legislation in its area, inspecting and monitoring government programs, collaborating with non-governmental organizations, conducting research and studies on the human rights situation in Brazil and the world, and handling issues related to ethnic and social minorities.

This objective has been accomplished on several occasions throughout its history. Until the creation of the Amnesty Commission in 2001, for example, it was the CDHM that received, analyzed and processed amnesty requests. At the time, the commission also recognized the responsibility of the Brazilian State for violations committed during the military dictatorship and recovered the memory of cases of deaths, disappearances and torture.

Another important initiative of the CDHM, in 1998, was to promote the law that defines the crime of torture in Brazil. The commission convinced members of Congress that the existing legislation did not adequately address the problem and organized a public hearing with former torturers and torture victims.

In 2002, it created a sub-commission focusing on the right to communication and launched a national campaign called “Sponsoring sleaze is uncivic: a campaign to value human rights on television”. The initiative gave rise to the first National Communication Conference. Of the 11 National Human Rights Conferences, 10 have been headed up by the CDHM.