Bolsonaro wavers over military intervention in Venezuela in Trump’s presence

Despite Brazil’s official stance of rejecting a military solution in its neighbouring country, the president made ambiguous statements 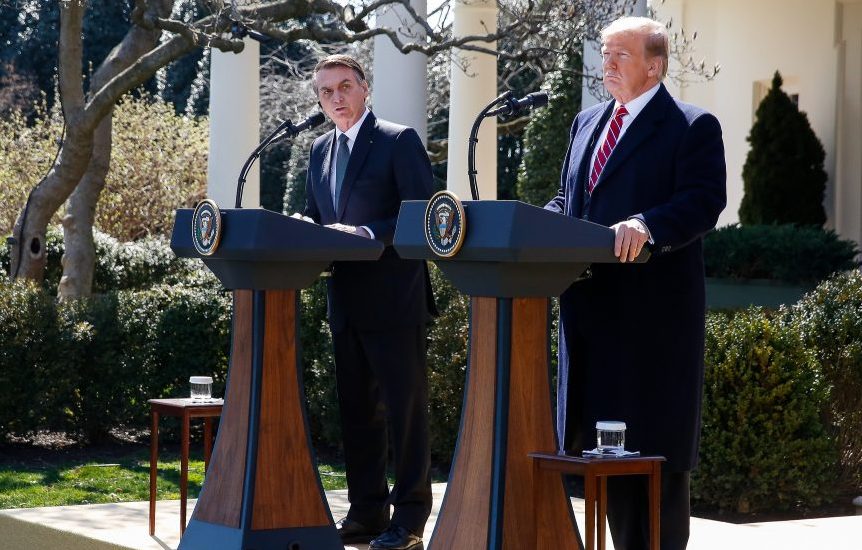 The political and humanitarian crisis that is affecting Venezuela and that has already caused an exodus of over three million people was one of the main topics discussed in a press conference held on the afternoon of Tuesday 19 March in Washington (USA) following the meeting between the North American and Brazilian presidents, Donald Trump and Jair Bolsonaro. Despite repeated official announcements by the Brazilian government rejecting a military solution, Bolsonaro avoided responding when asked by journalists whether Brazil would support an intervention with troops or whether he would allow the use of Brazilian territory by Americans.

“We discussed the possibility of Brazil being a big non-Nato ally. Whatever we can do together to solve the problem of the Venezuelan dictatorship, Brazil will be on hand to fulfil its mission and to bring freedom and democracy to the country.” Bolsonaro said.

When asked by a journalist what Brazil’s stance would be if the United States were to actually opt for intervention in Venezuela, Bolsonaro responded: “There are certain issues that cease to be strategies if they are broadcast. These confidential issues that may be discussed, perhaps they already have been, cannot be made public.”

Yesterday even the government spokesperson, Otávio Santana do Rêgo Barros, reiterated that Brazil would not support military intervention. Vice-President Hamilton Mourão also took the same position, following a meeting with the Lima Group, when he rejected both military intervention and the possibility of using Brazilian territory for an operation such as this.

“It is a serious matter when the Brazilian head of state issues ambiguous statements that are not aligned with the country’s official stance. This attitude generates uncertainty and reveals cracks in the central nucleus of the government simply because of being in the presence of the president of a power such as the United States.” Said Camila Asano, Programme Coordinator at Conectas Human Rights. “If concern lies with the Venezuelan people, military solution must be categorically rejected on the grounds of the damage this would cause.” She said.

Trump also avoided assertive statements on the possibility of military intervention, but said he was committed to reinstating democracy in Venezuela. “All options are on the table”. He said repeating his previous comment.

During the press conference, Trump and Bolsonaro announced their signing of military, technological and commercial treaties. Although the heads of state did not give details about the content of the accords, it was agreed that Brazil will allow the United States to use the base in Alcântara, in Maranhão, in exchange for cooperation in aerospace technology.

At the press conference, reiterating an earlier bilateral conversation between the two presidents at the White House, Trump mentioned the United States’ support for Brazil’s entry into the OECD (Organisation for Economic Cooperation and Development), a long-standing ambition of the Brazilian state.

The OECD has guidelines and principles of sustainability and human rights. One of its most important instruments is the “Guidelines for Multinational Enterprises” that clearly stipulate companies’ duty to respect people’s lives and well-being, as well as preservation of the environment. Brazil adhered to this legal instrument in 1997 and since 2003 has had a mechanism for handling grievances and complaints involving the conduct of multinational companies, the National Contact Point (NCP).

Several studies, such as the recently launched report by Conectas that evaluates fulfilment of the UN Working Group’s recommendations, based on the visit by specialists to Brazil in 2015, show that there have been repeated failures in the country regarding violations of international human rights standards for responsible business conduct. OECD parameters reflect the standards of the UN in terms of human rights.

“The possibility of Brazil joining the OECD would mean strict adherence to international norms and guidelines, not only on economic and anti-corruption matters, but also regarding the preservation of human rights and the environment. Our studies on Brazil’s performance in implementing UN recommendations are a good measure of the situation and they show that the country is still not reaching satisfactory standards in combining economic activities with socioenvironmental sustainability.” Said Caio Borges, Coordinator of Development and Socioenvironmental Rights.