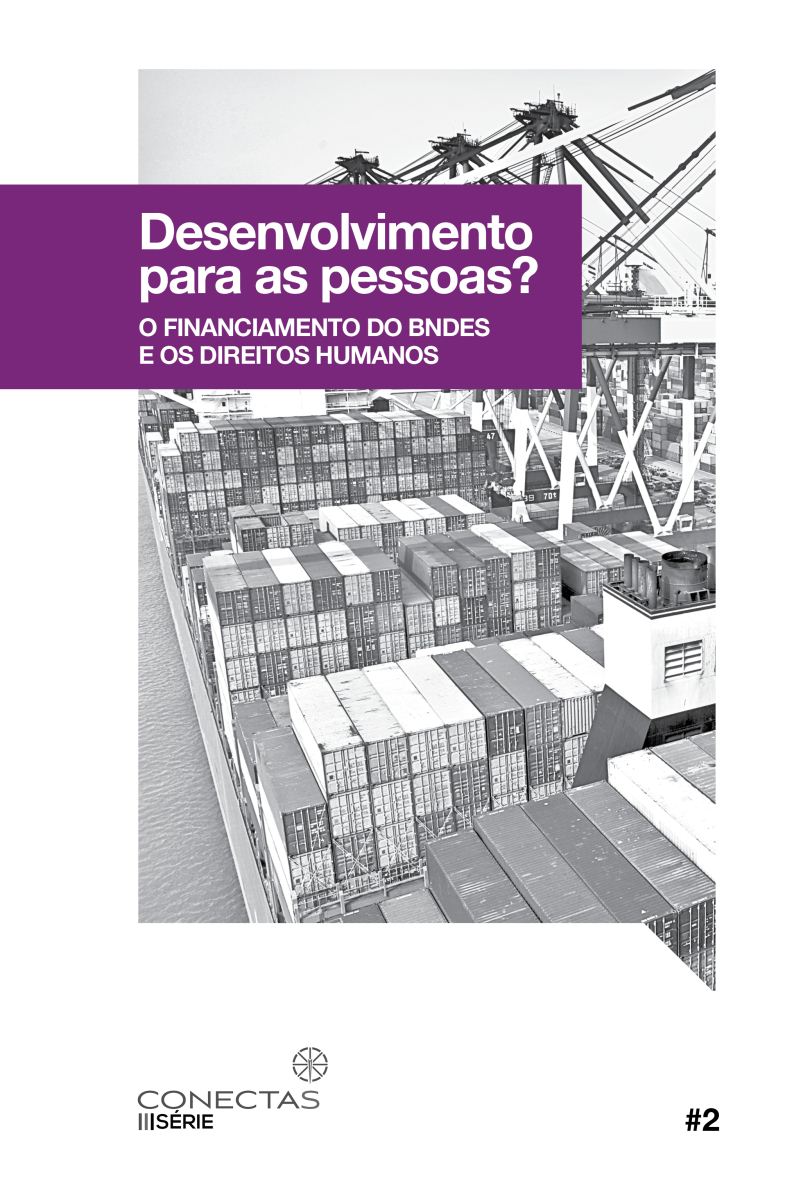 Conectas today published a detailed study on the rules and standards of transparency, accountability to society and socio-environmental impact assessment mechanisms of the Brazilian Development Bank (BNDES), the country’s leading development financing institution.

The report reveals that the lack of transparency at the bank prevents affected communities and wider society from monitoring the effectiveness of the tools the institution claims it has to ensure that its loans do not end up financing private business ventures that violate human rights in Brazil or abroad.

Moreover, it identifies weaknesses in the methods for preventing and mitigating socio-environmental impacts, in addition to a lack of direct dialogue with communities and a mechanism for receiving complaints and reports of human rights violations by the financed projects.

The analyses and recommendations in the publication are based on research that involved direct questions posed to the bank and an analysis of official documents, financial statements, technical reports, court rulings, Freedom of Information requests, Brazilian legislation and international norms, as well as interviews with actors directly and indirectly associated with the actions of the bank.

As a reference, the research used both national legislation and the UN Guiding Principles for Business and Human Rights, approved by the UN Human Rights Council in 2011. These Principles assert that state-owned companies or those that receive government funding or subsidies have a higher degree of responsibility for the protection of human rights. This is the case with the BNDES, a federal public company that, according to these Principles, should explicitly have a human rights policy and conduct potential impact assessments based on national and international standards.

“The publication is, in itself, a recognition of the importance of the BNDES to Brazil and its relevance among the world’s development financing institutions. If the study is critical, this is only due to the fact that society demands respect for the highest standards of transparency, human rights and environmental legislation, a respect that is worthy of the vital relevance that this bank has acquired over the course of its more than 60-year history,” said Juana Kweitel, program director at Conectas.

In the 100-plus page report, Conectas lists the flaws and shortcomings of the bank’s internal governance and the institutional and regulatory framework that governs its lending to private companies. It makes recommendations for strengthening the bank’s internal policies and Brazilian legislation in order to prevent BNDES financing from going to companies and business projects that cause significant social impacts. It also proposes that interested parties should be able to participate actively in the design of impact mitigation measures during all the stages of a project.

“The BNDES is not the only institution responsible for ensuring that development is a process based on the rights of the human person, but it is has the capacity to make a big difference. For the bank to effectively fulfill its mission to contribute to the social development of Brazil, it needs to be more receptive to society and change its vision about the role it can play in the protection of the rights of people who are affected by the projects it finances,” said Caio Borges, a lawyer from the Business and Human Rights project at Conectas. According to Borges, “the BNDES needs to improve its institutional transparency and release information produced throughout the cycle of the project, particularly in relation to its overseas loans”.

In a statement addressed to the organization Business and Human Rights Resource Centre, which released the study by Conectas, the bank stated that the issues raised in the document “have become matters of discussion in dialogue forums with civil society organizations in which the BNDES actively takes part”. It also claimed that, since 2008, the contracts signed by the institution include a Social Clause that “explicitly combats not only race and gender discrimination, but also child and slave labor in Brazil”. Finally, the bank said that it is a pioneer in transparency initiatives and that it provides information about all its credit operations on its website.

Click here to read the full statement sent by the BNDES to the Business and Human Rights Resource Centre.

One of the main criticisms is precisely the one that makes it difficult to conduct research with the necessary accuracy: the lack of transparency of the BNDES, a bank that between 2008 and 2014 received more than R$400 billion in funds from the Treasury. Together with the traditional sources of BNDES funding, this figure meant the bank was responsible, in 2013, for 20% of all the investments made in Brazil and for 75% of all the long-term credit for private companies in the country.

“The BNDES denies access to a wide range of information on the grounds of banking secrecy, the need for additional data systematization, national security, trade secrecy and the risk of the information affecting the price of securities. All these exceptions are provided for in Brazil’s Freedom of Information Law. However, the error lies in the bank’s overly expansive interpretation of them. This is the conclusion drawn by both the Internal Affairs Office and the Federal Audit Court,” said Kweitel.

As the study points out, the BNDES assigns secrecy status to documents that clearly should not be confidential, such as technical analysis reports on socio-environmental impacts, reports monitoring whether the contractual conditions imposed by the bank are being met and reports from specialized independent auditors contracted to assess compliance with the conditions.

The problem gets worse in cases when the bank supports the export of goods and services by Brazilian companies. One example mentioned in the report is the unprecedented application of secrecy in Brazil to information on BNDES financing for Brazilian companies in Angola and Cuba. As an aggravating factor, the Supreme Court has issued an injunction upholding this secrecy, making it impossible for Congress or regulatory agencies to conduct any oversight on the use of these public funds.

As noted by Professor Flávia Piovesan, the author of the preface to the report, the BNDES has asserted itself as a leading actor within the context of an ever stronger political discourse between the countries of the Global South, but it faces the challenge of “rethinking development from a human rights paradigm”.

As such, the study developed by Conectas contains a series of recommendations intended to bring the internal and external governance of the BNDES more in line with national and international standards of human rights protection. The proposals are not meant only for the bank, but also for other actors working in this context.

– release institutional information produced throughout the cycle of the project;

– establish institutionalized forums for civil society participation in the definition of policies and strategies;

– conduct social and human rights impact analysis in all its operations;

– make changes to the workings of its Ombuds Office or establish a new body that can work actively on the receipt and solution of grievances and complaints from victims and affected parties.

– condition transfers from the Treasury to the observance of human rights legislation by the BNDES;

– summon leaders of the BNDES to testify about reports of human rights violations;

– establish a Human Rights Code of Conduct for companies that want to have commercial relations with the government;

– create a registry of companies with a track record of human rights violations and prevent them from having access to official credit;

– alter (together with Congress) public tender and concession procedures so that impact assessments are carried out at the right time, before the start of the construction work.

– monitor and oversee compliance with Resolution 4327/2014, which establishes the requirement for all financial institutions to create a Social and Environmental Responsibility Policy;

– require greater transparency from the financial system regarding socio-environmental and human rights issues.

Business and human rights at Conectas

Conectas Human Rights is an international non-governmental organization founded in São Paulo, Brazil, in 2001 to defend and promote human rights and the rule of law in the countries of the Global South (Africa, Asia and Latin America). Through its Justice, Foreign Policy and South-South Cooperation programs, Conectas works on a national, regional and international level.

Since 2005, Conectas has also been active in the area of Business and Human Rights. In 2011, the organization collaborated with the International Commission of Jurists to develop research on access to justice for human rights violations committed by companies in Brazil. In 2012, Conectas launched a Portuguese language version of the UN Guiding Principles on Business and Human Rights.

Since 2013, the organization has been developing actions with a view to incorporating human rights standards into development financing and into the financial sector in general.