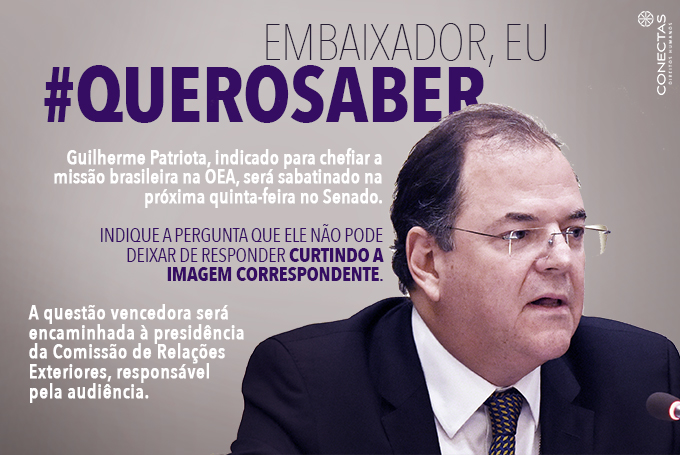 Guilherme Patriota, appointed by President Dilma Rousseff to head up the Brazilian mission to the OAS (Organization of American States), in Washington, will testify next Thursday, May 14, at 10 am, in the Foreign Relations and National Defense Commission of the Senate. The diplomat will take a position that has been vacant for more than four years.

The last representative, Ruy Casaes, was withdrawn by Brazil in 2011 in retaliation after the Inter-American Commission on Human Rights issued a precautionary measure calling for the suspension of the construction of the Belo Monte hydroelectric dam.

Before taking office, the appointee must be confirmed by the senators. Conectas has prepared three questions that must be answered by the diplomat during the confirmation hearing. The question most voted by internet users will be delivered by the organization to the president of the Commission, Senator Aloysio Nunes. A factsheet with details about the selected question will also be distributed to the senators present at the hearing.

“Before taking office, it is important for the ambassador Guilherme Patriota to clarify what Brazil’s relationship will be like with the OAS moving forward when he heads up the mission, both in terms of funding and concerning the respect and observance of its decisions,” said Camila Asano, coordinator of Foreign Policy at Conectas. “The lawmakers have the obligation to promote this dialogue with the Foreign Ministry and to demand consistency and coherence from the new ambassador.”

Internet users can vote until Wednesday, May 13, for the question they would like to be put to the ambassador. All you have to do it ‘like’ the corresponding image on the Facebook page of Conectas:

1) When does Brazil intend to resume its financial contributions to the Inter-American Commission on Human Rights?

The Brazilian government is also responsible for the financial sustainability of the IACHR. More than half of the Commission’s budget comes from voluntary contributions from countries. The last payment by Brazil, of just US$10,000, was made in 2009.

Folha de S. Paulo :: Brazil has not contributed to the OAS commission for five years  (in Portuguese)

2) What will the Brazilian mission to the OAS do to guarantee compliance with the decision of the Inter-American Court in the Araguaia case?

3) What responsibility does the Foreign Ministry have in the implementation of the recommendations made by the Inter-American Commission on Human Rights?

The implementation of these recommendations, whether they are issued in cases, hearings or press releases, depends greatly on how Brazil follows through on the national level.

Conectas :: The role of Brazil in the Inter-American System

The Legislative has important mechanisms to guarantee direct participation by society in the hearings. One of them is the Senate’s E-Citizenship website. Using this site, which requires only a quick registration, any citizen can help set the agenda for this and other hearings held in the Foreign Relations and National Defense Commission.