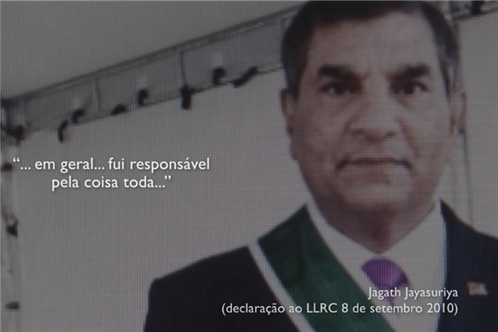 The ambassador of Sri Lanka to Brazil since 2015, General Jagath Jayasuriya is the subject of a call for investigations into crimes against humanity during the civil war in his country. Yesterday, August 28, the Spanish prosecutor Carlos Castresana filed a complaint with the Federal Prosecutor’s Office reporting the facts and asking Brazil to take action on the case.

In 2009, together with other Sri Lankan authorities, Jayasuriya commanded a massacre that killed between 40,000 and 70,000 people of Tamil ethnicity in the north of the Asian country. According to information from the Folha de S.Paulo newspaper, the ambassador stepped down on Sunday and left Brazil to return to Sri Lanka. Jayasuriya lived in Brasília and was also ambassador to Colombia, Peru, Argentina and Suriname.

In 1996, Castresana was responsible for filing the investigation that culminated in the arrest of the Chilean General Augusto Pinochet for such crimes as genocide and torture. In the case against General Jayasuriya, he is serving as a representative of the “Truth and Justice Project for Sri Lanka”, administered by the South African organization Foundation for Human Rights.

On the morning of Tuesday, August 29, Conectas requested clarifications from the Ministry of Foreign Relations about the presence of the ambassador in Brazil and asked whether the procedures for checking the background of General Jayasuriya when granting agrément took into consideration his involvement in the civil war in Sri Lanka.

“It is unacceptable that the Brazilian State offered diplomatic immunity to a person like Jayasuriya, given such serious accusations. Sri Lanka was the stage of war crimes and crimes against humanity, many of which were overseen by the general. Brazil has the obligation to investigate and to take the appropriate measures,” said Camila Asano, coordinator of Foreign Policy at Conectas. “It is indispensable for the Brazilian State to urgently revise its criteria and procedures so it does not provide sanctuary for war criminals,” she added.

Brazil is a signatory of international treaties that require an investigation and subsequent prosecution of the general for crimes against humanity, namely the American Convention on Human Rights and the Rome Statute.

The civil war in Sri Lanka lasted 26 years and was ended after a series of attacks that killed a large number of people – the UN estimates the death toll at between 40,000 and 70,000. Under the command of Jagath Jayasuriya, the Sri Lankan troops were responsible for sexual crimes and extrajudicial killings of civilians, as well as for the bombing of schools and hospitals. The violations were recorded by the soldiers themselves, in videos filmed on mobile phones, and they are being used as evidence against General Jayasuriya.

Watch below the video of accusations produced by the Truth and Justice Project for Sri Lanka:

(Warning: the following images constitute the accusations against the general and were collected from recordings circulating on the internet and filmed by Sri Lankan soldiers. They include scenes of explicit violence again men, women and children).