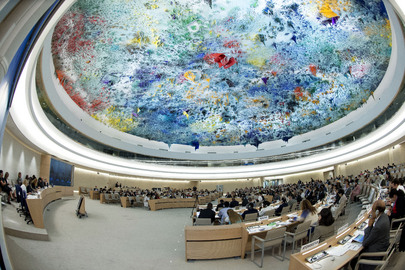 From 18/06 to 06/07 representatives from member states as well as civil society are meeting to debate human rights issues at the 38th session of the UN Human Rights Council in Geneva, Switzerland.

What is the Human Rights Council?

The UN Human Rights Council was created in March 2006 and is a space to discuss themes that are relevant to the global agenda, among them violence against Palestinian civilians in Gaza and approval of the first UN resolution, acknowledging that violence against the LGBT community is a human rights violation. The main objective of this body, made up of 47 member states, is to discuss human rights violations around the world, in additon to being a space for representatives of organisations to contribute and expose the demands of civil society.

What is the purpose of the Council?

The main objectives of the Council are based on protection, respect and development of universal rights in the field of human rights and the fight against violations.

Members of the Council are able to nominate specialists to study issues or countries and to report on situations in which a particular population’s rights are not being respected. In additon, experts also analyse whether member countries of the UN are fulfilling human rights pledges. This is known as the Universal Periodic Review.

Who are the Council members?

When and where does the Council meet?

Council sessions take place at least three times a year. There are also extraordinary sessions to discuss urgent matters, such as humanitarian crises. These sessions can be requested by any member, as long as one third of the members of the collegiate are in support.

What is the nature of Council sessions?

Human Rights Council sessions are organised into agendas that include discussion of human rights regulations implemented around the world and voting on resolutions. Rapporteurs also present reports made during visits to countries that are suffering human rights violations. Civil society organisations can also speak during the session and this space is generally used to denounce human rights violations in each country.

How long is the mandate of a Council member?

Members of the Council are elected by the General Assembly, the main deliberative organ of the UN, for a mandate of three years and cannot be re-elected after two consecutive mandates. Brazil is completing its 4th mandate which expires in 2019.

Can a member be expelled or suspended from the Council?

Yes. A member of the Council can have its rights and privileges suspended should any kind of systematic human rights violation be committed during their mandate. A suspension must be supported by a two third majority in a General Assembly vote in order to be approved.

What is Conectas’ participation in the Council?

Conectas has had consultative status membership since 2006, giving it the right to speak at Council meetings and to organise events in parallel with the formal session. The organisation has been present at all sessions since the creation of the Council and has addressed themes such as slave labour, violations in the prison system, abuse of police power in Brazil and anti-migration policies.

Despite being a member of the United Nations Human Rights Council, Brazil’s position in the cancellation of the visit of Juan Pablo Bohoslavsky, UN independent expert on external debt and human rights, was harshly criticized by institutions. The objective of his mission had been to assess the impact of economic austerity measures, in particular damage caused by constitutional amendment 95, freezing the ceiling of public federal spending for twenty years.

The Human Rights and Alliance of Civilizations Room is known worldwide for its colourful, 1.000m² ceiling created by the artist Miguel Barceló. The high cost of the meeting room, a gift from the Spanish government, has caused controversy. Construction costs reached almost US$ 30 million.