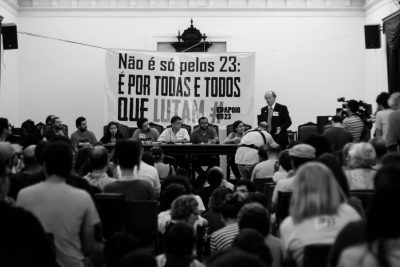 On Tuesday 26 February, the STF (Supreme Federal Court) took an important decision towards curbing abuses of police force at protests. The Ministers deemed undercover police activity at demonstrations against holding the Brazilian World Cup that took place in June 2014, to have been illegal.

With its decision of Habeas Corpus, the court came down in favour of 23 protestors who had been convicted on 17 June 2018, on the basis of police statements and ordered the judge on the case to remove the statements from the records.

In a controversial trial, the TJ-RJ (Rio de Janeiro Court of Justice) sentenced 20 demonstrators, in a single condemnation, to seven years in prison and another three who were under 21 years old, to five years and ten months. The convictions were for the crimes of forming a cartel and for the corruption of minors.

“This was an important step in rectifying the injustice committed against these young people. Social demonstrations cannot be seen as a threat to public order and activists cannot be treated like enemies. Freedom of expression and of assembly and association are one of the pillars of a truly democratic society.” Said Henrique Apolinário, a Lawyer on the Conectas Institutional Violence programme.

Condemnation at the UN

A short time after the conviction of the Rio Court of Justice, in August 2018, a number of civil society organisations sent a letter to the UN condemning the decision by the judiciary.

In a letter sent to the special rapporteur on the right to freedom of peaceful assembly and association, Clément Voule, Conectas, Article 19, Global Justice and the People’s Judicial Assistant, Mariana Criola stressed that the accusations against the demonstrators “were an attempt to criminalise the right to protest”.

The organisations called for the United Nations to issue a public declaration on the case and put pressure on the Brazilian government to annul the decision.

During the same period, the United Nations expert was in Brazil for meetings with the government and civil society. In an interview with Conectas, Voule stated that during his mandate he would be dedicated to putting pressure on countries’ judiciaries to guarantee the right to protest.

“The judiciary has become a tool used by powerful people to repress those who don’t have a voice.” He said.