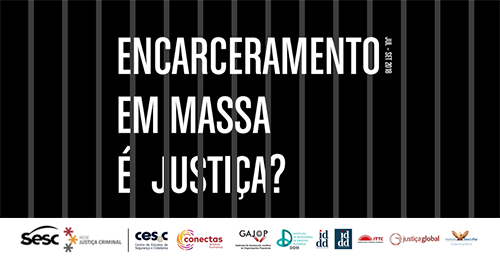 The campaign “Is mass imprisonment justice?” by the Criminal Justice Network, will be hosted by Sesc 24 de Maio, in the centre of São Paulo during the months of July, August and September. The initiative is part of a series of cultural, artistic and educational events envisioned for the campaign and has the aim of mobilising society to debate this issue.

The installation “Realidade Visceral” will be in place for the duration of the Sesc programme, from 11 July to 9 September. By means of a 360º video, viewers are invited to participate in a virtual reality experience that simulates an overcrowded cell. The intention of the installation is to make people more aware of the situation inside the prisons and emphasises rights violations suffered on a daily basis by prisoners.

The first cultural activity on the programme is the ConverSarau 1  “Mass incarceration, remand prisoners and alternative punitive measures”. Brazil is currently third on the list of countries that most imprison people in the world. Of this total, almost half the prison population is made up of people who are being remanded in custody, awaiting trial. Against this backdrop, the first ConverSarau proposes a debate on alternative measures to imprisonment and on perspectives and actions the country could adopt in dealing with the issue.

Emerson Ferreira, Psychologist and Egress of the prison system will mediate the discussion. He features in the video “Realidade Visceral”. Also among the guests are Beatriz Besen, Psychologist and Social Psychology Masters student at USP, Marina Dias, Executive Director of IDDD, Railda Silva, Activist and Coordinator at Amparar (The Association of Families and Friends of Prisoners) and Raquel da Cruz Lima, Lawyer and Researcher of the report Women without Prison, at ITTC (The Institute for Land, Work and Citizenship).

There will be five more ConverSaraus during the programme, as well as full-length film showings, musical showcases, theatre plays and fixed exhibitions. Please confirm your attendance. The programme is available on Facebook.

The Criminal Justice Network (RJC) was created in 2010 with the aim of combatting the abusive use of custodial prison sentences. It is a collective made up of eight Brazilian civil society organisations, working to make the criminal justice system fairer and more respectful of fundamental rights and guarantees. RJC’s work condemns the predominant use of prison as the State response to crime and denounces the choice of a punitive criminal policy that leads to mass incarceration. RJC believes that criminal policy should be based on validated information in order to reach a more precise diagnosis, to allow streamlined solutions to be implemented, to identify bottlenecks and propose corrective measures.

To this end, the Network works intensively on political impact, seeking to diversify and to be innovative in its approach. Strategies are aimed at mobilising public opinion, the press, the academic community, civil society and other players, in order to effectively draw the attention of public authorities, who are ultimately responsible for setting fundamental guarantees in motion and for promoting positive changes in the Brazilian criminal justice system.