Violent eviction by the police destroyed the school and six houses. For 22 years, more than 400 families have been living on and farming the land where a bankrupt factory is located 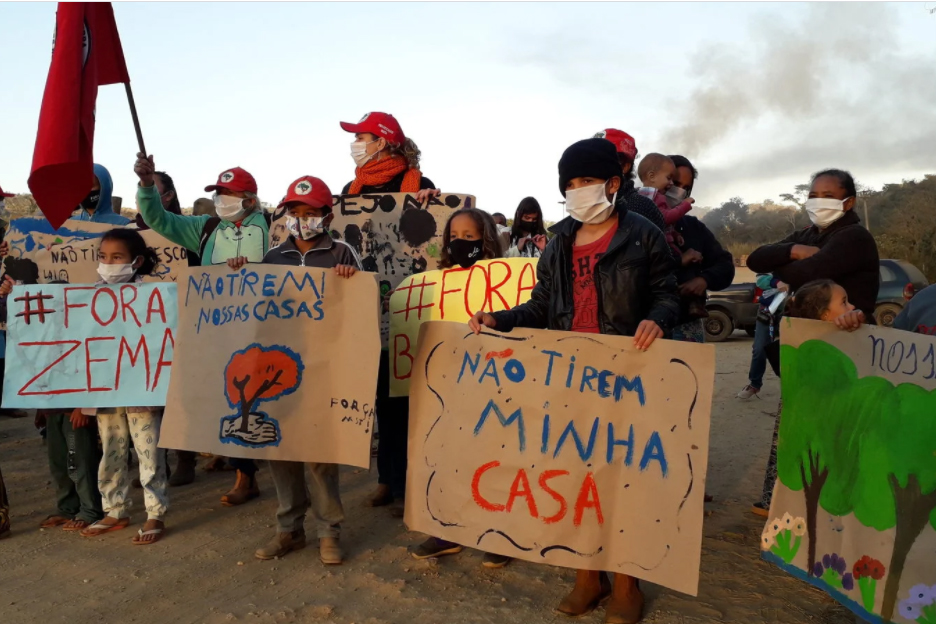 Residents of the settlement protest against the eviction and against the governor of Minas Gerais, Romeu Zema (photo: Daniel Camargos/Repórter Brasil)

In an open letter to the governor of Minas Gerais, Romeu Zema, civil society organizations condemned the police action to repossess the settlement known as Quilombo Campo Grande, located in the town of Campo do Meio in the south of the state, which occurred on Friday, August 14.

According to the local organizations Adere/MG (Agricultural Workers Alliance of Minas Gerais), Conectas Human Rights, Contar (National Confederation of Salaried Agricultural Workers), the Ethos Institute and the global organization Business and Human Rights Resource Center, the settlement was the stage of a violent police operation in the middle of the Covid-19 pandemic.

The operation involved 150 military personnel armed with heavy police equipment and a helicopter. The school and six houses were destroyed, two people were injured and another four were arrested for the “crime of resistance”. Among the settlers were pregnant women, elderly people and others in the risk group for Covid-19.

For more than 22 years, 450 families have lived on the land where the old Ariadnópolis factory is located, which used to be run by the bankrupt company Capia (Companhia Agropecuária Irmãos Azevedo). When the factory closed down in 1996, the company abandoned the area with outstanding labor debts.

“The occupation of the land gave a new meaning to the property and transformed it into a productive farm, with approximately 600 hectares currently planted. Over the past year, for example, the families that live on the site produced a surprising 8,500 sacks of coffee and they farm an area of 1,100 hectares with 150 different varieties and without the use of agrochemicals. One of the main products grown is Guaií coffee, produced sustainably and ecologically on a large scale,” the organizations pointed out in the letter.

The organizations are calling for an investigation into the excess use of police force, including the use of tear gas and stun grenades against families and children, the non-criminalization of the leaders and the expropriation of the Ariadnópolis factory’s land for the benefit of the families that have lived there for more than two decades.