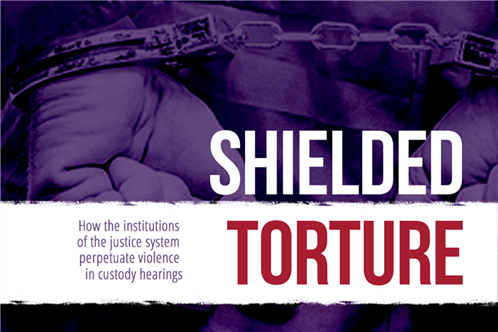 They assaulted you for no reason? What on earth for? Was there any motive why? Just a slap on the face? Did you know the police officers? This paperwork you signed is all lies? The police are lying?

With questions like these, sometimes asked in a raised voice, judges and prosecutors undermine one of the main instruments for preventing and combating torture in Brazil: custody hearings, which take place within 24 hours of a person’s arrest.

One of the main purposes of these hearings, instituted exactly two years ago in São Paulo by the CNJ (National Justice Council), is precisely to identify cases of violence by public agents when making arrests. New research by Conectas illustrates, however, that such violence is overlooked, trivialized and even rationalized by representatives of the Public Prosecutor’s Office and by judges.

According to the study “Shielded Torture”, which will be released on Tuesday, February 21, in São Paulo, a third of judges do not ask the detainees about the occurrence of violence when they are arrested, even when they have marks on their bodies. Among prosecutors, the disregard was even greater: the research found that in the vast majority of cases, the representatives of the Public Prosecutor’s Office did not ask any questions to investigate complaints of violence.

The report also exposes weaknesses in the service provided by the Public Defender’s Office. Although none of the public defenders justified the violence or questioned the veracity of the complaints, the institution did not challenge the judges and prosecutors when they were collusive in torture or aggressive towards the prisoners.

Criticisms are also leveled against the work of the Forensic Medical Institute, which is responsible for conducting physical examinations of prisoners after the hearing. According to the study, the reports produced by the forensic medical staff do not always accurately reflect the accounts of the victims.

“Police violence when arrests are made is nothing new in Brazil, but this research provides solid evidence that the violence is ignored – and sometimes defended – by the actors in the Justice System, which is extremely serious and in violation of national and international laws and standards,” said Rafael Custódio, coordinator of the Justice program at Conectas.

The event to launch the report “Shielded Torture” will take place on Tuesday, February 21, at 9 am, and it will be attended by the Federal Attorney General for the Rights of the Citizen Deborah Duprat, the journalist Bruno Paes Manso, the president of AJD (Association of Judges for Democracy) André Augusto Salvador Bezerra and the coordinator of the Justice program at Conectas Rafael Custódio. Admission is free and registration can be completed here.

Launch of the research “Shielded Torture: How the institutions of the justice system perpetuate violence in custody hearings”