In an interview with Conectas, researchers discuss the working model imposed by rideshare and delivery apps and consider alternatives that observe labor legislation 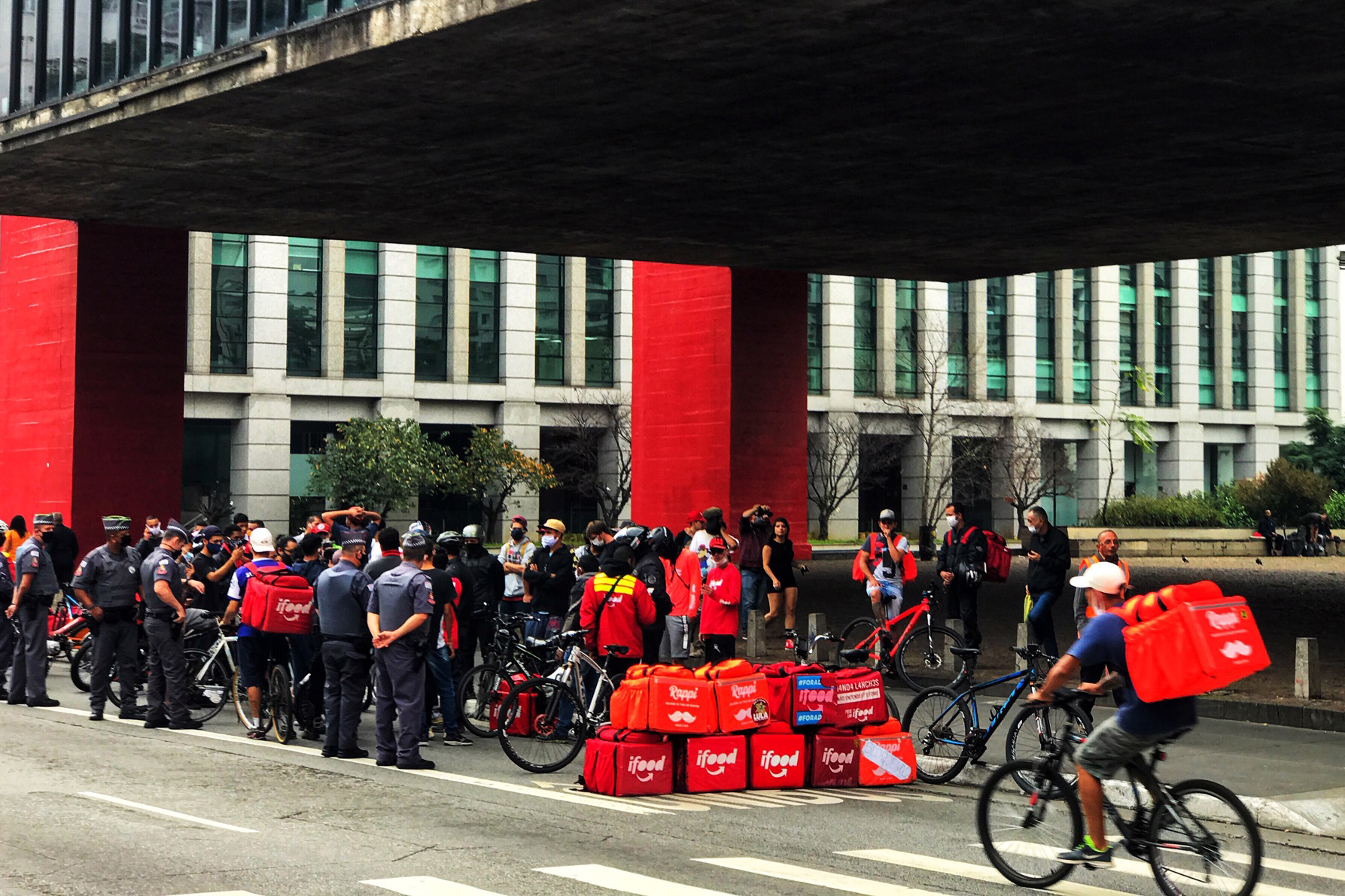 The social isolation measures imposed by the Covid-19 pandemic have highlighted the work of app-based delivery drivers and the working conditions they face, with exhausting hours, unclear payment criteria and a complete lack of rights or social benefits. Because of this, the first national strike of app-based delivery drivers took place on July 1.

To analyze the irregularities of this working model in light of labor legislation and to consider alternatives that respect worker rights, Conectas spoke, separately, to two of Brazil’s leading researchers on the topic of contemporary labor relations. Ruy Braga is a professor at the sociology department of the University of São Paulo (USP) and author of the book “A política do precariado” (The politics of the unstable worker); Ricardo Antunes is a professor of sociology at the Institute of Philosophy and Human Sciences at the State University of Campinas (Unicamp) and author of the book “O privilégio da servidão” (The privilege of serfdom).

Conectas – Workers or entrepreneurs? How do you define the people who make a living or earn extra money through apps? 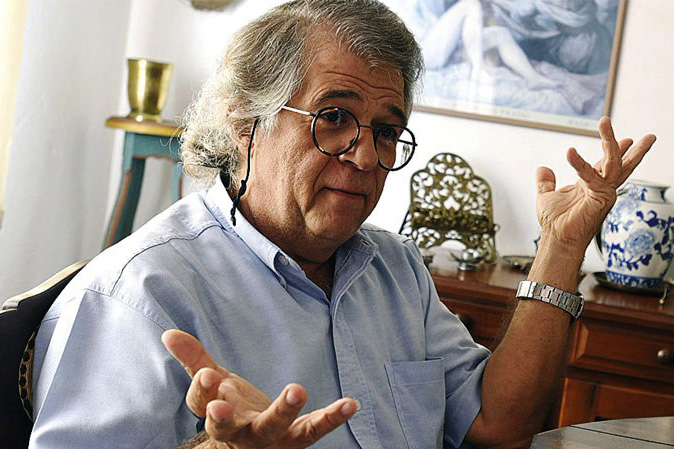 Ricardo Antunes is a sociologist and professor emeritus at Unicamp (photo: Sintrajud/press photo)

Ricardo Antunes – “Entrepreneurship” is a category with a strong apologetic meaning and one that is manipulated. It basically means that you need to create the conditions to build your own business and, therefore, survive. It is a category that transfers to the individual the capacity, the need and the obligation to get along outside the realm of social labor legislation. The most nefarious meaning of entrepreneurship is to individualize the working class and create the illusion that it survives on its own. The men and women who work for these platforms ought to be recognized for their status as employees just like any other group of workers. Their conversion into “service providers” only serves to mask this status and prevent them from having the rights that the working class as a whole normally has to vacation, the 13th salary [mandatory end-of-year bonus], a weekly paid day off, health insurance, etc.

Conectas – What challenges do the apps pose to Brazilian labor laws?

Ruy Braga researches sociology of work and is a professor of sociology at the Faculty of Philosophy, Languages and Human Sciences of the University of São Paulo (FFLCH/USP) (photo: press photo)

Ruy Braga – What these delivery companies have done is circumvent the labor laws, to avoid paying labor and social security rights. Consequently, one of the main sources of their business profitability has to do with the fact that they exploit workers without recognizing these rights. It is no coincidence that they spend so much money on lawyers, precisely to draft contracts that carefully avoid recognizing these workers as being subordinate and dependent on the app companies. These companies do something that is a great threat to society. On the one hand, they use cutting-edge technologies such as remote monitoring, geolocation, highly sophisticated algorithms for order distribution and for management and control over these workers – yes, because these workers are controlled by algorithms – artificial intelligence, machine learning and everything that is most advanced, and they combine it with what is most backward, which is the pillaging of labor rights and the commodification of labor as if it were a commodity like any other. Another aspect has to do with the ideological construction of the “entrepreneur” as someone who is self-employed, independent, has flexibility and freedom – which is also not correct. They are subordinate and dependent on these companies. Even the rating system these companies use forces the workers to choose one app, otherwise they will not get calls all through the week.

Ricardo Antunes – Through this trick of defining them as “independent contractors”, these apps use a huge mass of a surplus workforce while bypassing the protective social labor legislation. The main problem with these apps is that they impose exhausting work hours and salary conditions over which the workers have no control because they are run by algorithms. The algorithms govern the time, the journey and the work intensity. It is imperative for the approximately 5 million delivery or rideshare drivers to have a law that recognizes their status as employees. We cannot let a company dismiss a worker without explaining why. It would be very easy for the courts to check the algorithms of these companies and discover who worked six, eight or even 12 or 14 hours a day. They are not only employees but they are often overexploited.

Conectas – Has any country already recognized the employment relationship between rideshare and delivery drivers and app-based companies? If so, what rights have been granted?

Ruy Braga – Yes, several countries have. The most famous case is the state of California, where the State Senate passed a bill that was signed into law by the governor classifying app-based drivers as subordinate and dependent on companies, giving them access to contractual and labor rights, having to bargain collectively and sign contracts. It is very important to note that the app economy operates in a kind of legal limbo, which is the result of the absence of government. When the government decides to regulate, it can clearly identify this relationship of subordinance and dependence and consequently classify it as a very typical employment relationship.

Ricardo Antunes – This is a very recent phenomenon. A decade ago, these companies did not even exist, but as they have expanded so quickly, there is now a discussion about a protective social labor legislation. The most emblematic case is the state of California, which recently determined that all workers with long working hours be considered employees and, as such, subject to protective social labor legislation and rights, including unionization. In Brazil, we have already had trial court rulings and appeals that recognize dependency and their status as employees. But just like in courts all over the world, what for one labor judge constitutes an employee for another represents a form of entrepreneurship and partnership. There are also favorable results coming out of England, where Uber’s activities were set back recently by a London court ruling. The same thing has been happening in France, Spain and in Scandinavian countries that do not allow these types of company because they violate protective social labor legislation.

Conectas – What would be the ideal model to be applied in Brazil? Should employment contracts be regulated by the CLT [Labor Law] or by some intermediary model?

Ricardo Antunes – I’m not sure about an ideal model, but every time you contract people for working days that are equivalent to the working days of the other employees, you need to recognize rights such as vacations, 13th salary, a weekly paid day off and health insurance. Recognition of the employee status is what is required of these companies that are worth billions and claim they have financial difficulties when it comes to paying their workers. Well, if they have financial difficulties operating, then don’t operate. What they cannot do is to enrich themselves even more by circumventing protective social labor legislation in countries where the recognition of labor rights is deficient.

Ruy Braga – I think there should be recognition by the CLT [Labor Law]. The CLT is flexible enough to cover workers with the characteristics we see in the app economy. Since the labor reform was passed in November 2017, it has been possible to consider alternatives. Because of this reform, there is a lot of talk about the “intermittent employment contract”, which could be an intermediate alternative or a transition of sorts towards more protection in the future. It is possible to imagine several forms of contracts. What is not possible to imagine is this limbo, this “every man for himself” that we see today in the platform economy, particularly as it is practiced in Brazil. The CLT contract makes it possible to make payment through the minimum wage law, to have a calculation base for the number of journeys and working hours. It is necessary to regulate the working day in order to guarantee paid rest. It is necessary to incorporate these workers into the protection system, particularly the social security system, and it is very important to somehow classify this relationship as a subordinate and dependent employment relationship.

Conectas – Apps represent a new economy and an opportunity to generate employment and income. Could regulation ruin this model?

Ruy Braga – These companies are making millions a year and they pay their shareholders very generously. It is a fallacy to think that a minimal regulation of an overexploited form of work could ruin a company. If paying the minimum required by labor legislation would ruin a company, then the business model is not sustainable. It is an irresponsible model; a model, so to speak, that is neither innovative nor reasonable for a minimally healthy economy.

Ricardo Antunes – If a company uses the work of men and women to increase its profits and for private enrichment, then it is essential to have a protective social labor legislation. The idea that providing rights could ruin a company is injurious because it sends the message that, for a company to be profitable, there needs to be a mass of enslaved workers. In my book “O privilégio da servidão”, I look at this phenomenon and explain that we currently have something that resembles a type of digital slavery. They are companies operating with highly developed techno-scientific-informational machinery and that have antiquated employment relationships, exhausting work hours, accidents, deaths and so many other nefarious characteristics.

Conectas – What is your opinion of the strike organized by delivery drivers for July 1?

Ricardo Antunes – The struggle for rights essentially depends on the mobilization capacity of the workers. There are already plans in motion for a global association of rideshare workers. In May 2019, there was an attempt at a general strike by rideshare workers. The stoppage scheduled for July 1 in Brazil is very important because it is being staged to demand that certain rights are guaranteed. It is a way of saying that workers do not accept reduced working hours, they do not accept being dismissed unilaterally. This creates the social conditions for recognizing their status as employees.

Ruy Braga – It is the early stages, the first step, the first experience in organizing app-based delivery workers, which is very positive. There are innovative characteristics from the point of view of self-organization, which we have observed all over the world, particularly the type of organization supported by direct action using WhatsApp and social networks, not through unions but in many cases receiving the support motorbike unions. It has all the elements that really align this movement with the most contemporary organizational trends of these unstable workers that we see all over the world.