The demarcation of indigenous lands does not interfere with the country’s development or with agribusiness; understand the main fallacies circulating on social media 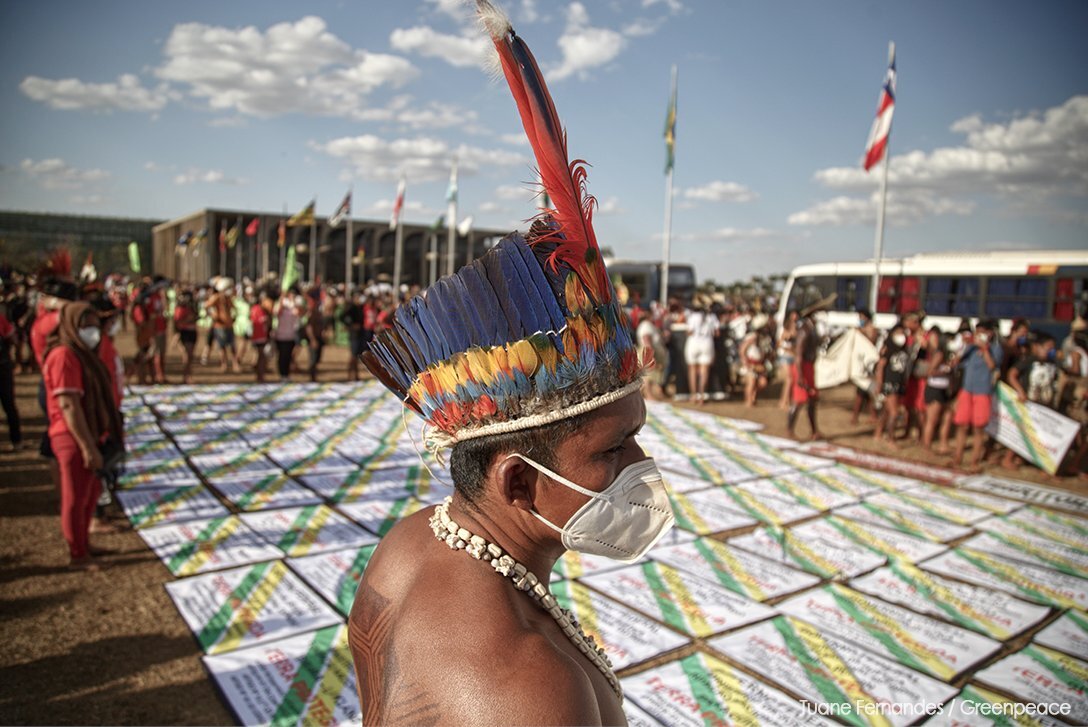 Although the Constitution of 1988 acknowledges the ancestral rights of indigenous peoples to the lands they have traditionally occupied, these rights are under constant threat. Currently being heard in the Supreme Court is a case on the “Time Frame” thesis, according to which only lands that were occupied on the date of the promulgation of the Constitution can be demarcated. On another front, the National Congress is debating Bill No. 490, which makes changes to demarcation rules.

As indigenous peoples are mobilizing to defend their rights, some myths persist that distort the debate. Conectas comments on some of them:

THE TRUTH: A significant amount of the fires and deforestation in the Amazon is related to agriculture, especially large and medium-sized farms, according to research from the National Space Research Institute (INPE) and the Federal University of Minas Gerais (UFMG). Indigenous peoples, in fact, are great protectors of the forest.

According to the latest report by MapBiomas, indigenous lands are largely responsible for guaranteeing the protection of Brazil’s biomes. Only 1.6% of all the deforestation that has occurred over the past thirty years was registered in these areas (territories either demarcated or awaiting demarcation). On the other hand, private areas were responsible for 68% of the loss of native vegetation.

The conservation of large areas of vegetation on indigenous lands ensures the maintenance of essential ecosystem services, such as climate regulation and rainfall, maintenance of groundwater sources, soil stability and fertility, and pest and disease control, among others. In addition to the benefits for life on Earth, these functions are also essential for agriculture and livestock, and they also ensure the maintenance of industry and well-being in cities.

MYTH 2: “There is too much land for too few Indians”

THE TRUTH: Although the demarcation of indigenous lands is a right guaranteed by the Constitution of 1988, native peoples still face difficulties getting their rights recognized.

MYTH 3: “Indians hold back the development of the country”

THE TRUTH: In the Western model, the idea of development in general is linked to economic growth and exploration. In this sense, nature is seen as a mere resource to be exploited. None of this makes sense for indigenous cultures, many of which have a kinship with the land and an entirely different concept of development. “The idea of us humans separating from the land, living in a civilizational abstraction, is absurd. It suppresses diversity and denies the plurality of life forms, existence and habits,” writes indigenous leader Ailton Krenak.

As such, before claiming that indigenous peoples “hold back the development of the country”, we need to ask what type of development we are talking about. The development that consumes resources is the same one that puts the future of the planet at risk, for example, by increasing temperatures to levels never seen before, according to the latest UN climate report.

THE TRUTH: While indigenous lands occupy 13.8% of Brazilian territory, farms occupy 41%, according to 2019 data from the IBGE statistics institute, an increase of 5.8% from the data in 2006.

“There are 421 Indigenous Lands that have already been approved, totaling 1.066 million km² and 303 in the demarcation phase, or 110,000 km². More than 600,000 people live on them. Meanwhile, 51,200 latifundia farms, or 1% of all rural properties, cover 20% of Brazil. These are data from the Federal Gazette, the IBGE statistics institute, the National Indian Foundation (FUNAI), the Socioenvironmental Institute and the MapBiomas project,” said Sonia Guajajara, an executive coordinator of the Association of Indigenous Peoples of Brazil (APIB) in an article published in the newspaper Folha de S. Paulo.

MYTH 5: “Indians need to be integrated into the rest of Brazil”

THE TRUTH: Indigenous peoples are, above all, Brazilians. Therefore, their rights are guaranteed by the Federal Constitution and by international treaties to which Brazil is a signatory. However, these peoples have cultures, traditions and land uses that may differ from so-called Western culture. This does not make them second-class citizens or savages who need to be integrated into the country. These ideas reinforce a colonial and racist stereotype.  Moreover, there are dozens of isolated indigenous groups that, under pressure from the advance of logging, illegal mining and agribusiness, run the risk of having their rights violated.