Conectas launches magazine on religion and human rights at Casa 1

At a round table discussion, activists, researchers and religious leaders will discuss the theme of the 29th edition of Sur 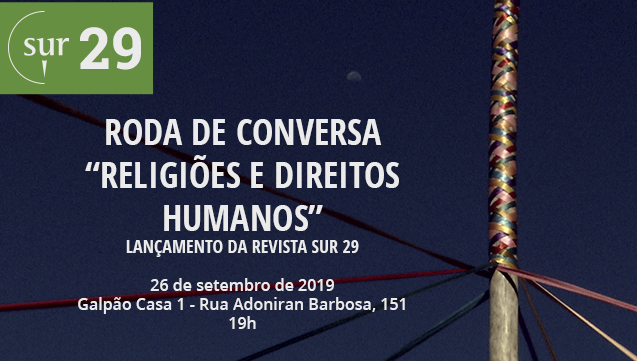 Next Thursday, 26 September at a round table discussion, researchers, activists and religious leaders will discuss the role that religions play in the human rights agenda. This open event is free of charge and will start at 7pm at the Centro Cultural Casa 1 (R. Adoniran Barbosa, 151 – Bela Vista, São Paulo). The focus of the centre is to foster the arts and culture of the LGBT+ community as well as providing support.

Issues such as the political influence of the evangelical caucus, religious and gender dogmatism, freedom of religion and belief systems as a right, are some of the key points of debate. The event marks the launch of the 29th edition of the Sur Magazine, bringing broad reflection on this theme in articles, interviews, profiles and artistic pieces of work.

Content from this edition of Sur will be presented during the event, including the exhibition of artistic pieces of work from the Franco-Brazilian project “Híbridos – Os Espíritos do Brasil” (Hybrids – The Spirit of Brazil) and the video “Rito de Passá” (Opening the Pathways) the title track from MC Tha’s new album.

Sur – International Human Rights Magazine is published by Conectas. It seeks to influence the global human rights agenda, producing, promoting and publishing innovative research and ideas, principally in the Global South, on the practice of human rights.

The publication is edited in Portuguese, English and Spanish with free online access to a public of over 20,000 people, in more than 100 countries. A hard copy edition is also distributed to the principal libraries, universities, international organisations and cultural centres around the world.

The project “Híbridos – Espíritos do Brasil” is one of the new contents offered in the magazine. The authors are two French artists and researchers and this project aims to provide the viewer with an immersion into different Brazilian rituals through the images and songs that characterise each of them.

Event: “Human Rights and Religions” and the launch of edition 29 of the Sur Magazine on “Religions and Human Rights”

Confirm that you will be attending the event