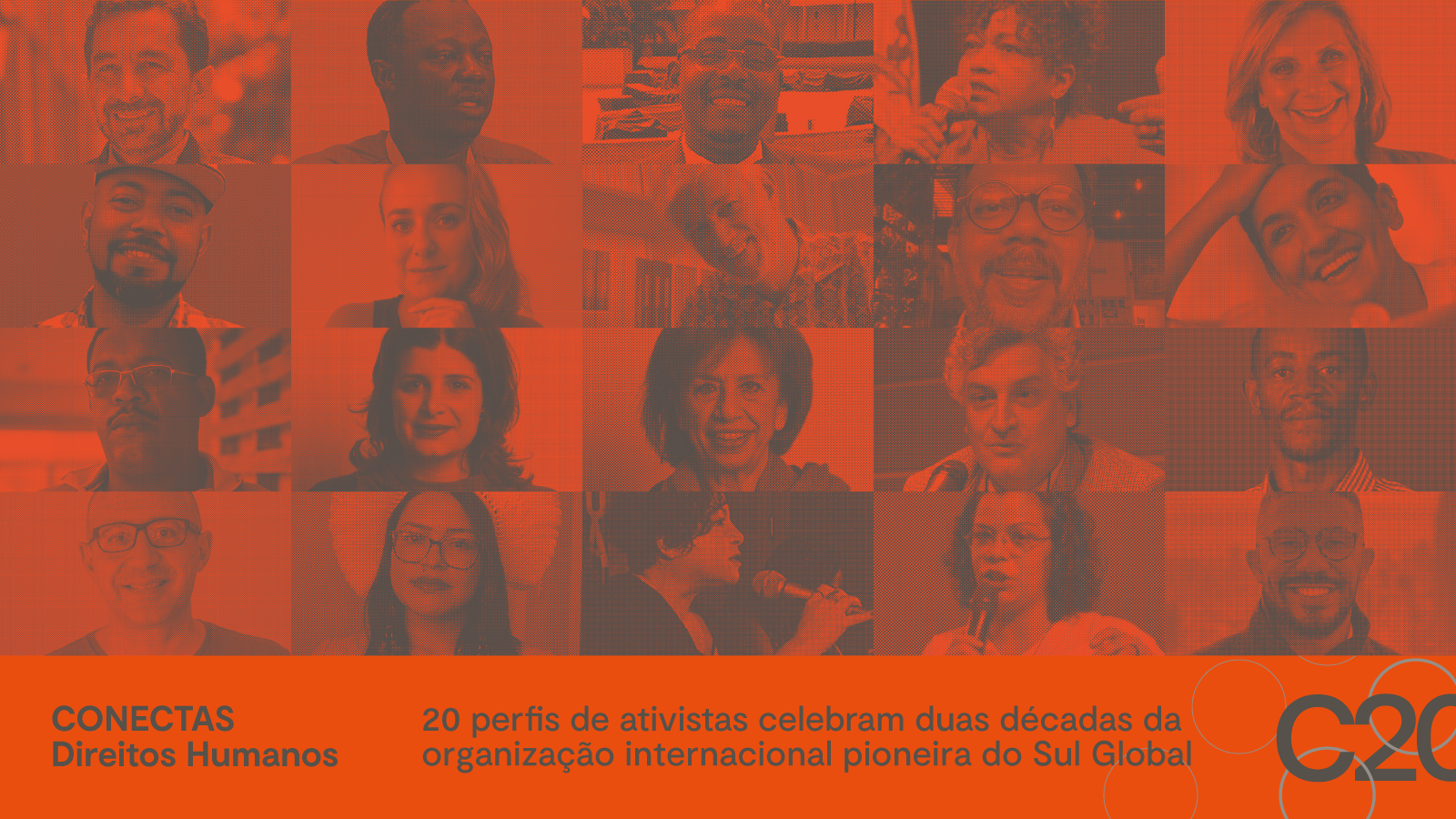 Conectas is celebrating its 20th anniversary in 2021. And 20 stories of central figures from these two decades show how the organisation came to be a kingpin in the consolidation of an innovative human rights movement that has brought together different actors who have transformed social conditions in the Global South.

The stories of the founders, former collaborators and partners of the organisation are compiled in the publication “Conectas 20”, launched on Friday (10), International Human Rights Day.

The publication was curated by the journalist, Fernanda Mena with texts by Maria Brant, Maria Carolina Trevisan and Fabiana Moraes. The opening pages contain the profile of the Egyptian economist Malak El Chichini (click here to read her full profile), co-founder of Conectas and executive director from 2005 to 2011. In the book, the former UN senior official says the dream of the organisation´s founders was to connect civil society in Brazil and other countries in the Global South with international human rights protection systems.

In his profile in the book, the lawyer Oscar Vilhena Vieira (click here to see his full profile), co-founder of Conectas and Malak´s closest partner on this journey, says that the driving force behind creating the organisation was the understanding that there was a large imbalance between the North and South in the field of human rights.  Conectas was born to show that the exchange of experiences between countries in the South is important and productive. “The perception that we needed stronger organisations in the southern hemisphere to vocalize our vision of what was happening here, was what led us to create Conectas”, he says.

It was in this spirit that the first International Human Rights Colloquium was held and preceding the creation of the organisation, in May 2001. It was “a week-long meeting in São Paulo that put young activists from Portuguese-speaking countries in touch with each other, uniting Africa and Brazil”, as the publication, Conectas 20 illustrates. The Colloquium has been held 16 times to date.

From the founders to partners in the grassroots movements

In addition to Malak El Chichini and Oscar Vilhena Vieira, other people who tell their stories and how their paths crossed with Conectas are: Custódio Duma (lawyer and Mozambican activist),  Débora da Silva (co-founder of the May Mothers Movement), Denise Dora (executive director at Article 19), Sandra Carvalho (coordinator at Global Justice and former Conectas adviser), Lucia Nader (former director at Conectas), Eloísa Machado de Almeida (former coordinator of strategic litigation at Conectas), Frans Viljoen (director of the Centre for Human Rights at the University of Pretoria, Otto Saki (programme official at the Ford Foundation of South Africa), Clément Nyaletsossi Voule (United Nations special rapporteur on freedom of assembly and association), Haris Azhar (director at the Lokataru law firm and former director of the NGO Kontras) and Thiago Amparo (lecturer at FGV and former editor of the Sur Journal).

“Conectas 20” also has texts on Douglas Belchior (co-founder of Uneafro Brasil), Padre Paolo (director of Peace Mission), César Rodríguez-Garavito (president and director at the Centre for Human Rights and Global Justice at the NYU School of Law, former director of the NGO DeJusticia), Jorge Ferreira dos Santos (head of Adere – articulation of rural workers in the state of Minas Gerais), Ishtar Lakhani (advisor on creative activism), Shyrlei Rosendo (coordinator at Maré Networks) and Samara Pataxó (legal advisor at Apib – articulation of the indigenous peoples of Brazil).

Plurality is the nature of Conectas

Juana Kweitel, director at Conectas believes, “the book is a testimony to the plurality of the people who have built and continue to build the organisation. There are people with different paths who find in Conectas a powerful space to talk and be heard. Since its foundation, Conectas has been a meeting place for those who struggle for human rights to be implemented and this is a source of great pride”. She goes on to say that “taking stock of this history is important and inspiring, especially in this period that is demanding an alignment of voices in the defence of rights and democracy in Brazil”.