Amid a collapsing health system, doctors with foreign diplomas are prevented from working

More than 16,000 physicians come up against bureaucracy to practice their profession during the most serious phase of the pandemic in Brazil 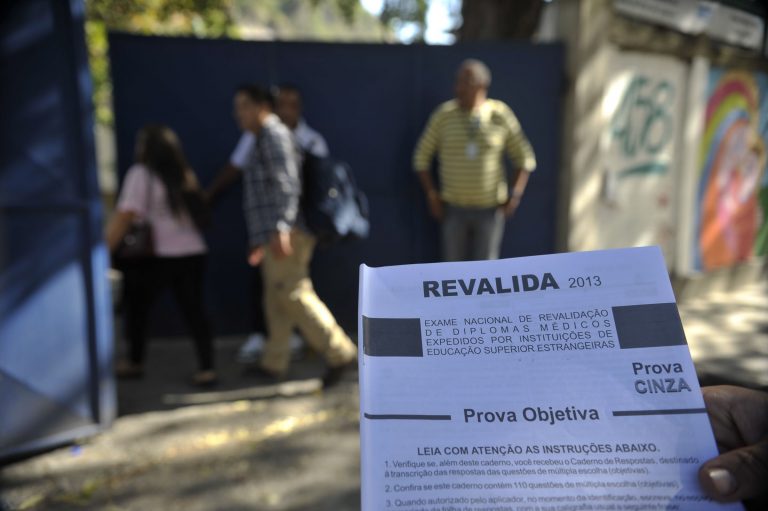 As Brazil experiences its worst moment of the pandemic, with a shortage of health professionals and ICU capacity close to 100%, there is a contingent of more than 16,000 doctors who are available to work but who cannot be employed. They are doctors trained outside the country who cannot work in Brazil because they are waiting for their diplomas to be validated. What could be one of the solutions to prevent a collapse of the health system has met resistance by the slow response of the federal government.

The national exam to validate foreign medical diplomas, called Revalida, has two stages and is organized by INEP (National Educational Research Institute), a body of the Ministry of Education. Since the start of the pandemic, only the first stage – on theory – has been held, in December 2020. A 2019 law requires the test to be applied every six months, but this requirement has never been observed. No date has yet been set for the application of the second, practical, stage of the exam.

Read More: The impacts of preventing doctors trained abroad from working in Brazil

Together with organizations such as Compassiva, the Caritas Archdioceses of São Paulo, the Center for the Treatment of Migrants (CAM), the Center for the Human Rights and Citizenship of Immigrants (CDHIC), the Migrations and Human Rights Institute (IMDH), Missão Paz and Visão Mundial, Conectas sent an official letter to INEP expressing concern over the schedule for holding the second stage of the exam and completing the validation process.

Citing the 2020 Medical Demography in Brazil study, conducted by the School of Medicine of the University of São Paulo in December, the organizations point out that “the North and Northeast regions of Brazil have much lower ratios of doctors per inhabitant than the other regions of the country, and there are also medical deserts, or areas with no access to a doctor”.

“Since March last year, three editions of Revalida should already have taken place, but not one has been completed,” said Camila Asano, program director at Conectas. “There were more than 16,000 doctors trained abroad, including Brazilians and migrants, enrolled in the first stage of Revalida 2020, who would have made a huge difference saving lives in the current environment.”

Asano mentioned some other measures that could be taken given the current emergency situation, such as the validation of medical diplomas on the Carolina Bori Platform of the Ministry of Education or by public universities. The reintegration of doctors who participated in the no-longer active Mais Médicos (More Doctors) program and who remained in Brazil could also help alleviate the problem, following the example of the state government of Minas Gerais, which passed Law 23,799/2021 in the state legislature permitting the exceptional and temporary hiring of former participants.

“Organizations that monitor this problem closely, such as Compassiva, also suggest that state governments could do more to address the issue, like the government of Bahia, which published Decree 20,309/2021 creating a program to support State Universities in the validation of diplomas,” said Asano.

Of the more than 16,000 people who sat the first stage of the Revalida exam, held in December, only 2,402 of them, from different cities across the country, were approved for the second stage. The registration fee, however, is a disincentive for participation. “It is essential for INEP not to establish any more obstacles for candidates to continue the process, such as the fee announced for the second stage of the exam, of more than R$3,000,” said Asano. “The Revalida Law states that the cost shall be limited by the amount of the grant established for resident doctors. In other words, this amount serves as the cap, not the floor, and the Institute may charge a lower amount that is more consistent with the circumstances of the candidates.”

Nevertheless, no date has yet been set for the second stage of the exam. Despite the justification by INEP that the pandemic has held up the schedule, Asano recalled that the last time the Revalida exam occurred was in 2017. Furthermore, since the second stage is practical, it could be applied following all the health and safety rules.

INEP itself said it conducted a technical study concluding that the second stage can be held in hotels, schools and universities, but CAAFM (Advisory Commission on the Assessment of Medical Training), which is responsible for establishing the competencies tested by Revalida, opposed this possibility, insisting that the practical exam be held in hospital outpatient clinics when they less crowded. “The position of CAAFM ignores the urgency of the pandemic and the record daily deaths that we are seeing,” said Asano.

“It is important for INEP to include in the notice for the exam measures that prevent crowds, such as distancing, and the mandatory use of masks and hand hygiene, while making more cities and university and school buildings available with different rooms for the testing. But it must not use the pandemic as an excuse to further delay one of the solutions to resolve the shortage of doctors during the most serious and emergency phase of the pandemic in Brazil,” she added.