5 urgent measures for the prison system during the coronavirus pandemic 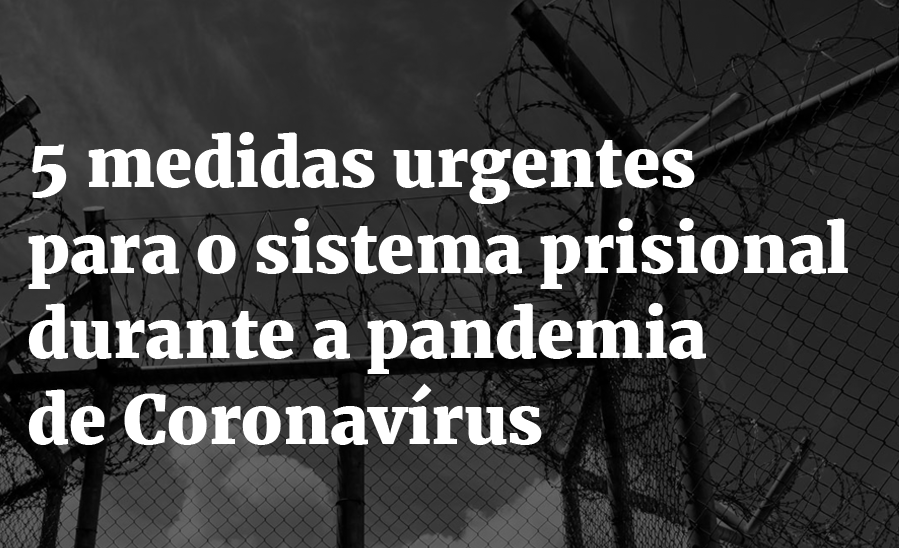 5 urgent measures for the prison system during the coronavirus pandemic

There is no reason to fear a Covid-19 pandemic in prisons, said Sérgio Moro when he was still Minister of Justice and Public Security. “There is an environment of relative safety in the prison system with regard to the coronavirus given the fact that the prisoners are isolated from society,” he said in a press conference on March 31.

This thinking, however, is not shared by the main international human rights bodies. “Persons deprived of their liberty comprise a particularly vulnerable group [to the novel coronavirus] owing to the nature of the restrictions which are already placed upon them and their limited capacity to take precautionary measures. Within prisons and other detention settings, many of which are severely overcrowded and insanitary, there are also increasingly acute problems,” reads the report of the SPT (UN Subcommittee on Prevention of Torture).

For this reason, international bodies such as the UN (United Nations), WHO (World Health Organization) and OAS (Organization of American States) have been quick to issue recommendations to be followed by governments. According to the WHO report, preserving the health of these people is important because, among other things, efforts to control Covid-19 in the community are likely to fail if the same care is not carried out in places of detention as well.

1. Reduction of the prison population: 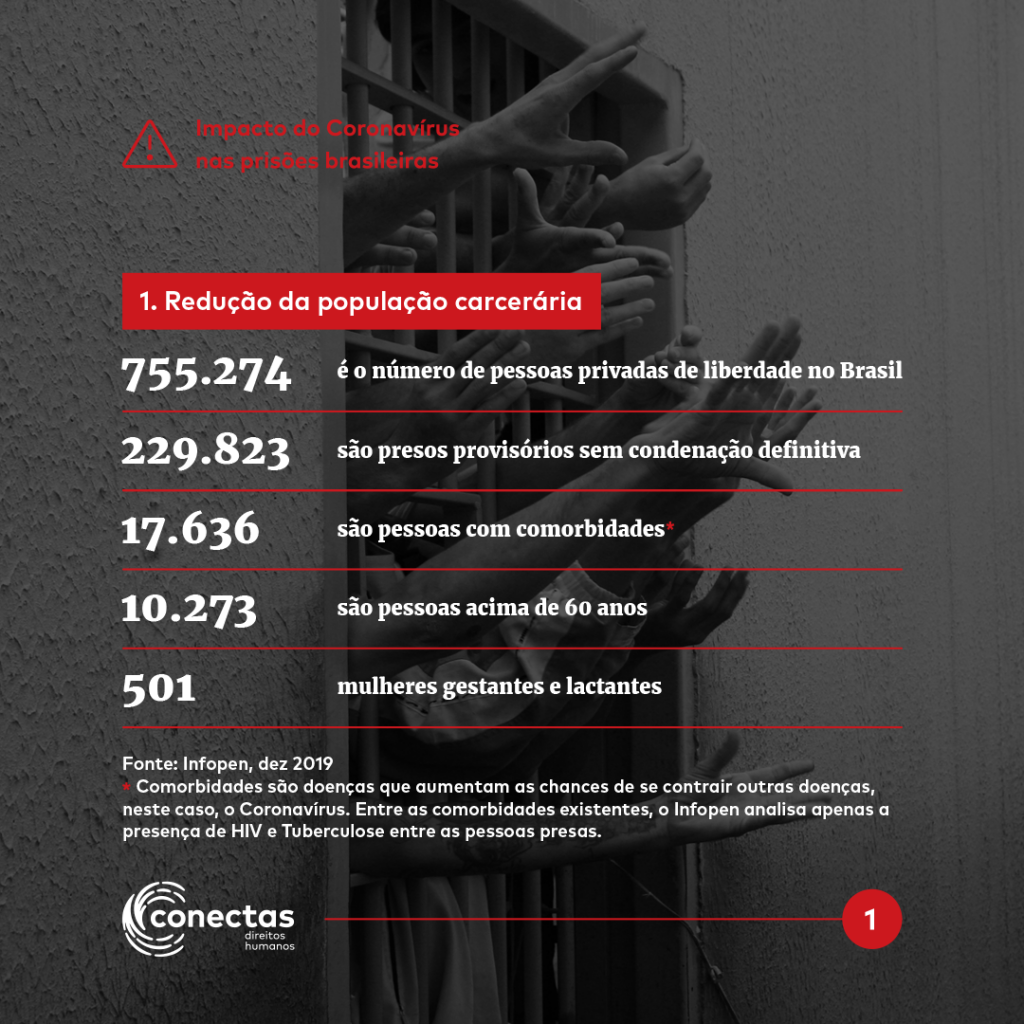 According to the SPT report, it is necessary to reduce the prison population wherever possible by implementing schemes of early, provisional or temporary release for those detainees for whom it is safe to do so. Countries such as Iran, Northern Ireland and Ethiopia have already adopted such measures.In Brazil, the president of the CNJ (National Justice Council), Dias Toffoli, who is also chief justice of the Supreme Court, issued recommendations for courts and judges across the country on March 17 to reduce the chances of new infections in prisons. In addition to a reduction of new imprisonments, the recommendations also include release from pre-trial detention for pregnant or breastfeeding women, mothers or guardians responsible for children under 12 or a person with disabilities, as well as indigenous people, the elderly and people with disabilities or who are in the risk group.

According to Depen (National Prison Department), by early April, nearly 30,000 prisoners had been released by the courts. The IACHR (Inter-American Commission on Human Rights) acknowledged the work of the CNJ as exemplary. 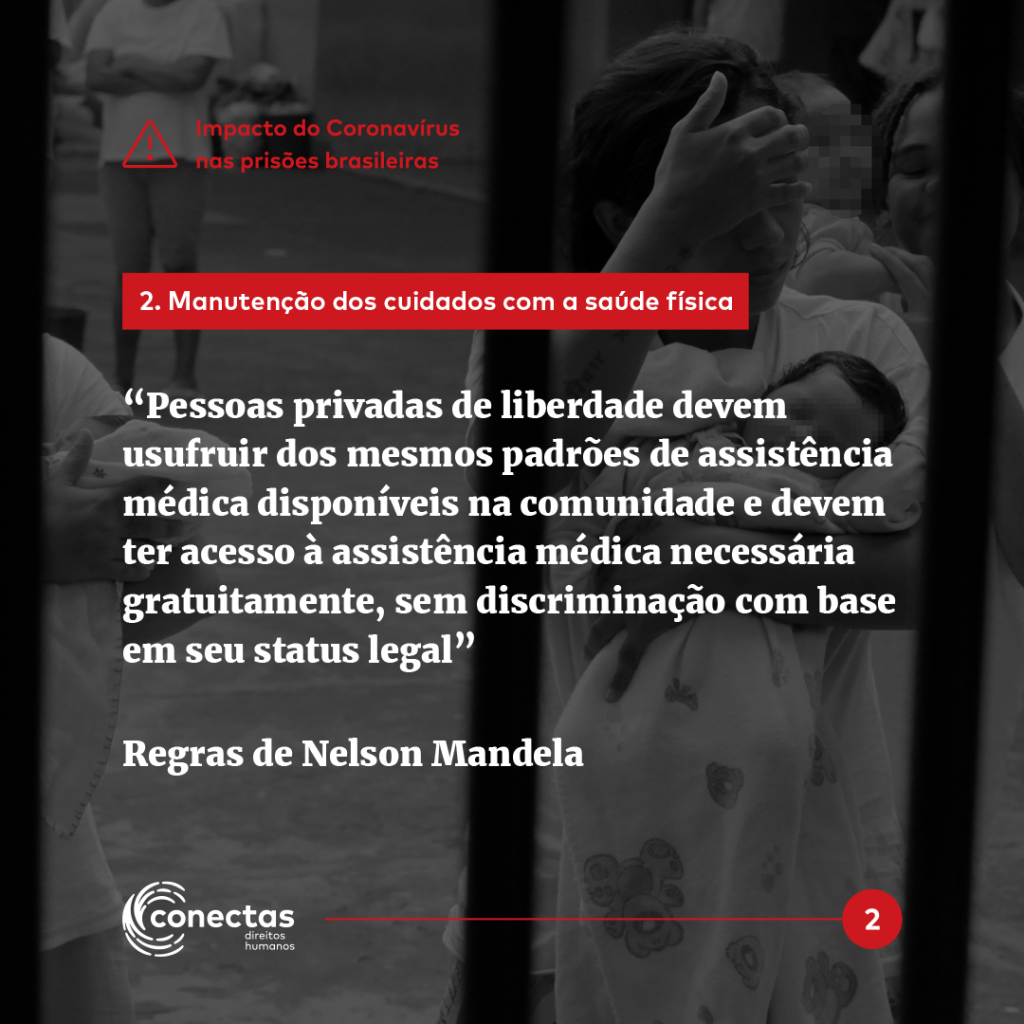 The SPT report notes that the State is responsible for the health care of people in its custody. “Prisoners should enjoy the same standards of health care that are available in the community, and should have access to necessary health-care services free of charge without discrimination on the grounds of their legal status,” reads the document, citing the “Mandela Rules”, a set of international standards for the treatment of prisoners. 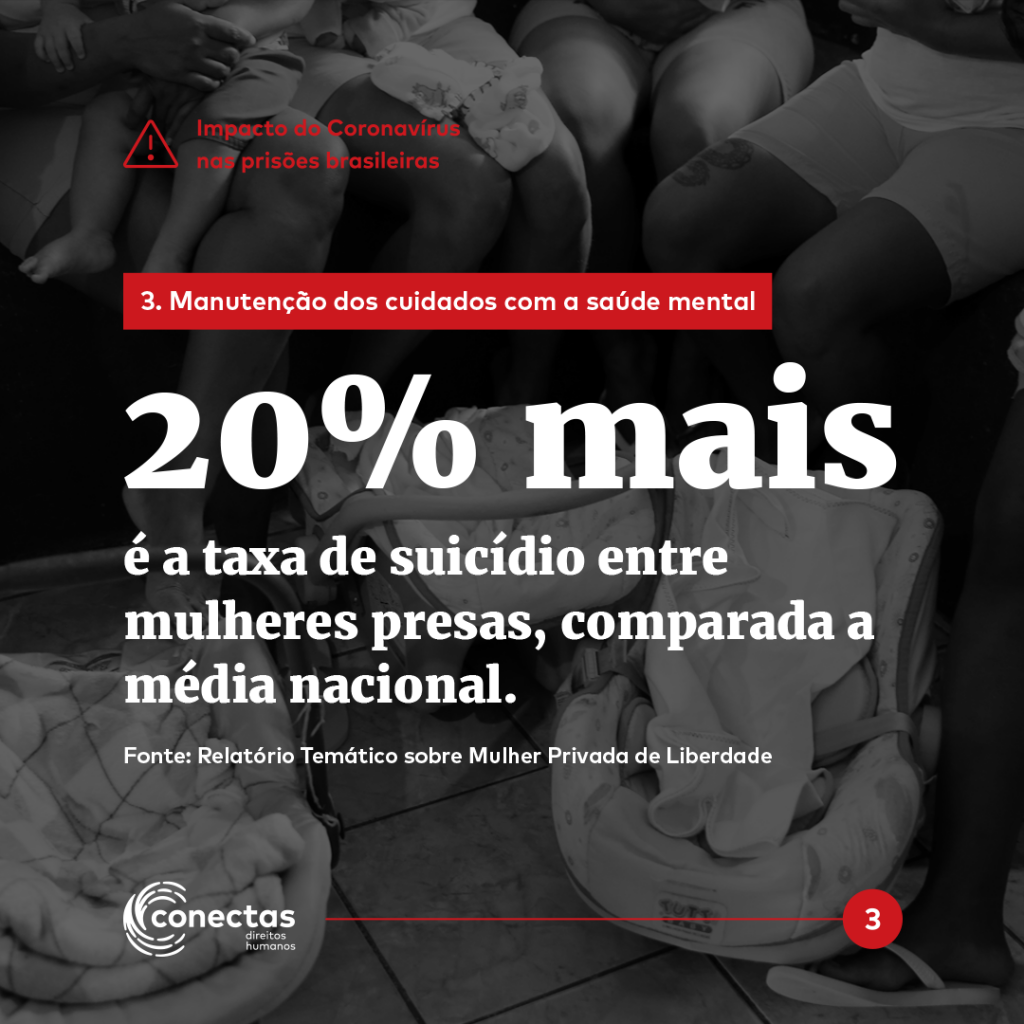 The international bodies have stressed the importance of taking into consideration the psychological and behavioral reactions of prisoners. “Solitary confinement and protracted or indefinite detainment, including decades of detention in prisons or other closed settings, negatively influence mental health and well-being,” reads a UN special report on mental health.The report also highlights that the mental health conditions and suicide rates among prisoners are worse than in the general population. In order to expand emotional support in crisis situations like this, it is recommended to share information on the disease transparently, while also ensuring ongoing contact with the family.

4. Maintenance of health care during the quarantine: 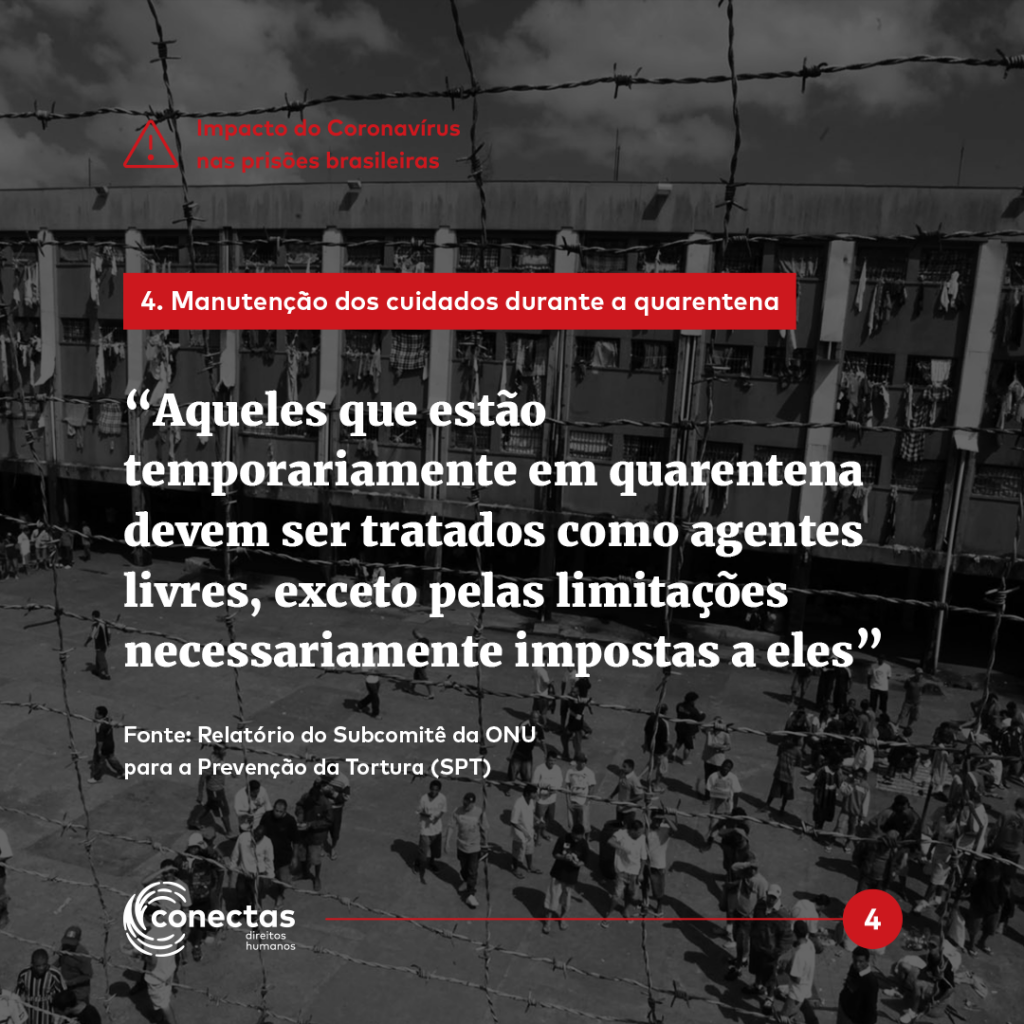 In its report, the SPT also issues guidance for prisoners who need to be quarantined. According to the document, “those who are being temporarily held in quarantine are to be treated at all times as free agents, except for the limitations necessarily placed upon them”, and, within limits, they should be permitted purposive activities as well as the possibility to communicate with friends and families.Moreover, states the report, “since quarantine facilities are de facto a form of deprivation of liberty, all those so held should be able to benefit from the fundamental safeguards against ill-treatment, including information on the reasons for their being quarantined, the right of access to independent medical advice, to legal assistance and to ensure that third parties are notified of their being in quarantine, in a manner consonant with their status and situation”. 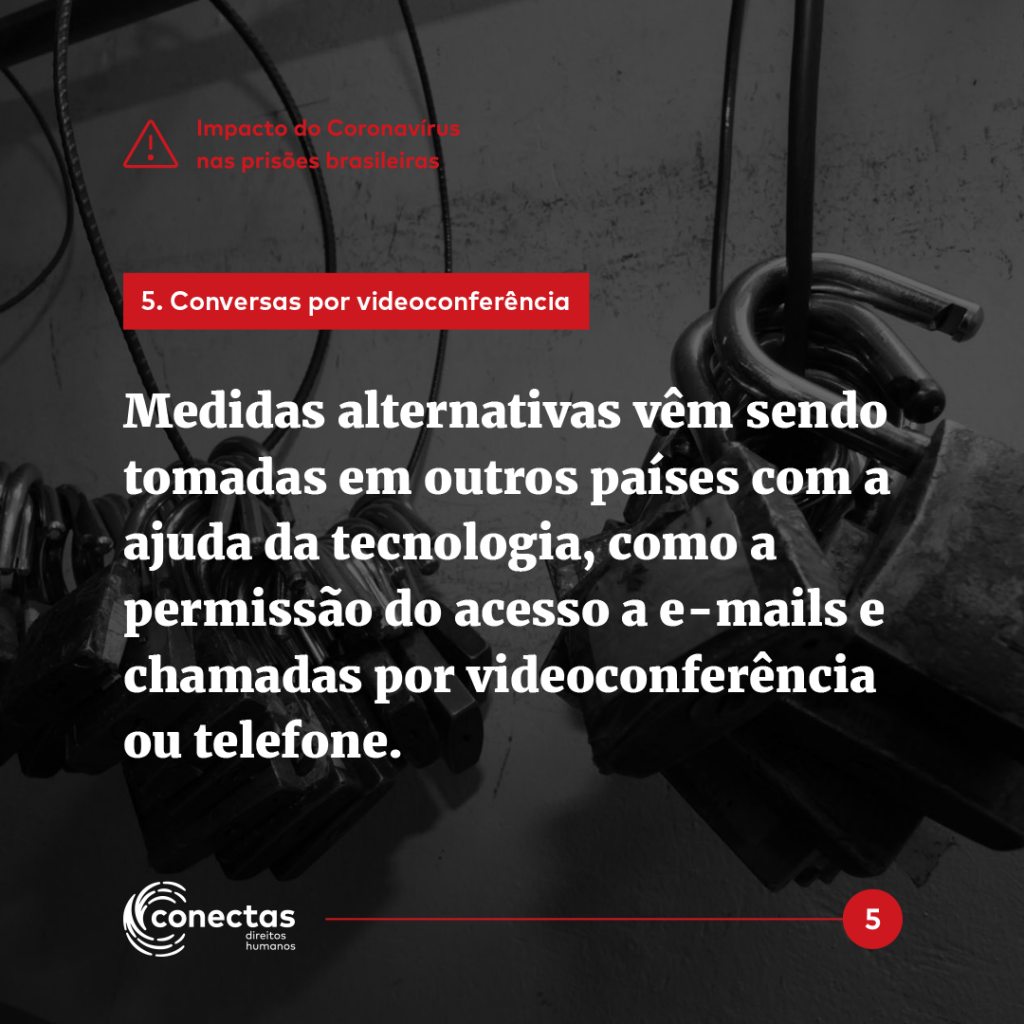 The UN High Commissioner for Human Rights, Michelle Bachelet, said in a speech that visits to closed places like prisons need to be restricted. But she added that “such steps need to be introduced in a transparent way and communicated clearly to those affected. Suddenly halting contact with the outside world risks aggravating what may be tense, difficult and potentially dangerous situations”.Bachelet highlighted the alternative measures that have been taken in other countries with the help of technology, such as permitting access to emails and calls by videoconference or telephone.